Simple is often better - after all, it seems that perfection is attained not when there is nothing more to add, but when there is nothing more to remove.*
So what can be simpler than a one piece razor that you can insert and remove the blade from without opening it up? Or to go one better; such a razor, but made cheaply and easy from a single piece of sheet metal?
Walter P Keene invented just such a razor, and filed for a patent in the middle of 1925. He did this by a couple of simple metal stampings that fit one inside the other, with a helical slot for the blade. Or as the patent text describes it:


...blade is supported and held between two cylindrical surfaces with the blade edge flexed over an elongated helically cut slot...


In the drawings, numeral 10 designates the outer shell or casing preferably formed of sheet metal in a punch press, consisting of an outer skin contacting surface with a helical cut tapered edge 11, the centers of the radii of this surface forming the axis of the bores formed in the side walls 12 and 13, these walls being preferably formed in planes at right angles to the axis, these walls taking the place of a handle as of the familiar hoe type of safety razor, the walls being grasped as shown by the dotted lines of a hand in Figure 1, a convenient position for use in under arm work, although an equally convenient method is to grasp the rear part of the shells as outlined by line 14:, between the thumb and fingers, either of these methods serving where the handle grasp of an operator is lost.

Supported within the outer shell is a second shell of substantially the same form, drawn of sheet metal, in which the cylindrical and approximated surface to the inner cylindrical surface of shell 10, is struck from radii of less length, so that when they are assembled, there is formed an accurate cylindrical space adapted to receive and hold the razor blade.

It's worth noting that Mr Keene's razor required proprietary blades - had he designed it for standard double edged blades (even if only one edge was exposed at any given time), I can actually see this razor being successful. As it is, it seems to have to sunk without a trace. 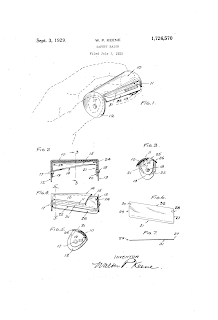 *) Antoine de Saint Exupéry, in reference to aircraft specifically but all that man do in general.
at 09:10 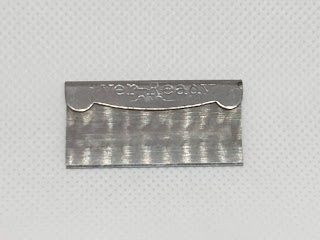 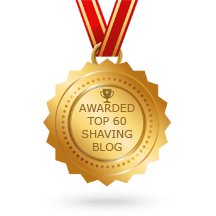